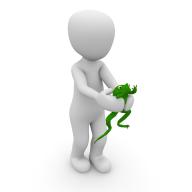 For better or for worse, Rival Gaming is known for being a bit "hit and miss" with their newest releases. You never really know if you're getting a game that's going to be really popular or a title that's extremely generic with weak gameplay. In the case of the Frogged slot, one of their most recent titles to hit online casinos, it's become a very big hit at Slots.lv and for good reason: It's likely to be their best release in a very long time, if not ever.

Frogged is based on the classic Frogger arcade game from the 1980s. Not only was Frogger extremely popular, but because the same themes and concepts were extended over to the slot version, Slots.lv has reported that Frogged is one of their most popular new titles right now. We anticipated a large level of popularity with our review of the game, but even we had no idea it was going to get this popular this quickly.

When it comes to why this game is seeing so much play, the fact of the matter is that the graphics are great, but the key is the gameplay. Players really feel like they're trying to dodge cars, buses, bulldozers and more, and the bonus features are based on the later parts of each stage of the original arcade game where the frog nervously hops across logs and the backs of alligators to make it to safety on the other side. This has been handled in a really great way with multiple stages of play in the slot version.

One of the main selling points for playing at Slots.lv is the fact that they have one of the best selections of games that US players will be able to find. This includes titles from Rival Gaming, Realtime Gaming and BetSoft. Frogged is a good example that they don't only have quantity, they also have quality, and the pure replay value of this game is proof of that. We aren't sure if Rival Gaming is going to be able to follow this up with a title that matches this particular game in popularity, but then again, we're not sure if anyone else could reliably do so either.