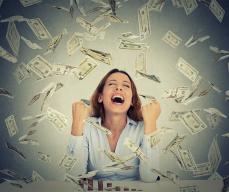 Table games aren't the first thing many people think of when they think of big jackpots. While slots are represented in greater numbers, and because the progressives in slots create a situation where there is a high volatility with lots of major payouts, there are still some big winners in the six-figure and higher range for certain table games. Let'em Ride is a favorite among players who like card-based table games, and it turned one lucky player into a big winner at Bovada Casino.

The lucky player in question goes by the name Eric M., and he's from Arizona in the United States. Eric was able to take down a whooping $163,632 payout at Let'em Ride. This game is tied to a progressive jackpot, and he was dealt a royal flush that allowed him to qualify. It's a pretty cool way to give table game players chances to win massive payouts as well, and it's a great opportunity for players to take a shot at winning a life-changing sum of money, as Eric found out himself.

Let'em Ride is a complicated, poker-based game. Players make three bets of an equal size. After being dealt three cards, they have the choice to either keep all three of their bets active or pull one of them back. A fourth card is dealt, and the player has another opportunity to pull back a bet if he or she prefers. Finally, the fifth card is dealt, and the player's five-card hand is compared to a pay table, much like the ones in video poker, to determine the payout.

Bovada Casino has hundreds of games to choose from, and this includes an extensive collection of table games. Players who want a larger variety of titles love to play here, but because they have so many games and so many players, they also post up some pretty incredible winners as well. It seems like there are several six-figure and larger winners from this online casino each and every month, and that's not surprising considering their level of popularity. Overall, if you're looking for opportunities to win major amounts of money, then this is a good place to try to do it.