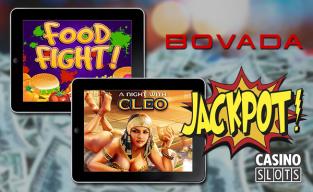 One of the biggest goals of an online slot player is to take down a massive payout. A life-changing sum of money can exchange hands in a single play of a lot of games, and Bovada Casino has seen this happen twice back-to-back recently. This is a pretty incredible big of luck by a couple of players, and it came on a pair of slots that get a lot of attention at this online casino.

Details on These Big Wins

The first payout came from a player named Rock H. from Colorado. He played the Night with Cleo online slot and won a jackpot worth $127.331.38. This was a life-changing sum of money for the player, and it was on a game that has a great storyline and solid graphics. Next up was the second payout, which was awarded to Paul D. from Boston. He took down a massive $808,529.80 on the popular Food Fight slot, a game with a hilarious theme of food actually being in a fight.

The Slot Selection at Bovada

One of the reasons why players from the US keep taking down big wins at this online casino is that it has a great selection of titles from multiple US-friendly software developers. Both Rival Gaming and Realtime Gaming have content distribution deals with this company, and that puts them in a position to beat out the competition that only has one or the other. It's a winning bet for players because it puts most of the top online slots that are available to players from the United States in one place.

As we mentioned above, Bovada has a tremendous selection of slots. However, they also have great promotions, which is another reason why they remain so popular. They have options for any type of player to get paid on a regular basis with special offers and deals, and it's one of the reasons why they come so highly recommended. Add that to a user-friendly interface, solid customer service and reliable cash outs, and it's clear that they have a solid operation all-around.