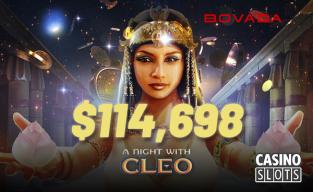 There are certain periods of time where one particular online slot can seem like it's "running hot" and paying out a lot more than it seems like it should, and there's one of those going right now at Bovada Casino. This comes by the way of the A Night With Cleo slot, and it's recently paid out a progressive jackpot win worth $114,698. With that having been said, and with as large of a win that is, it's not the only time that game has paid out big so far this year.

Why is This Game So Popular?

The A Night With Cleo online slot is a proprietary game available at Bovada and a few other online casinos, and it gives players a chance to have a bit of an adult-themed experience within an Egyptian motif. The basic idea is that Cleopatra is known as a seductress, and she would have powerful figures come to her in Egypt in an attempt to get them to do her bidding. There were several people who this plan worked on, and if you get the bonus feature, you'll see her in various stages of undress, which is atypical for slots these days.

Bovada Casino is the place to be, particularly if you're a US player looking for big jackpots to try to win. They seem to have a new jackpot winner every week or so, and four different big payouts on the same game in the past month is a good indicator of what the news cycle is like coming out of this site. They have a solid mix of games from different software providers with valuable promotions, and they have a tremendous reputation for paying out reliably.