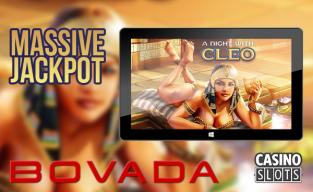 On January 8th, Bovada Casino player Vince A. scooped a huge progressive jackpot prize thanks to the popular A Night With Cleo slot game. Vince, from Texas, had a stake of just $2 per spin on the game when the randomly-awarded progressive jackpot was claimed, boosting his bankroll by $360.800.57.

A Night With Cleo has paid out the progressive jackpot three times recently, with Bovada Casino players scooping $67,000 on December 28th, and $57,000 just two days before Vince claimed his massive reward. There's no minimum stake needed for players to be in with a chance of landing the jackpot, and no special combination of symbols needed, as it's a totally random event which has added to the appeal of the game, making it a huge success.

With classic ancient Egyptian symbols across the 5 reels and 20 paylines of this game, players are treated to a free spins bonus round, where wins are tripled, and Cleopatra herself is a valuable wild symbol. This adult-orientated slot game even has a gamble feature where Cleo takes off items of clothing with each successful 50/50 gamble, but despite this, the highlight is still the real chance to land a huge progressive jackpot in any spin.