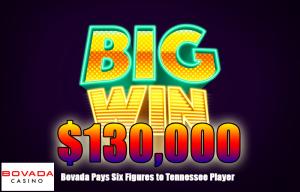 A player by the name of Daniel from Tennessee, USA was able to run up some major winnings at Bovada Casino recently. This lucky player scored over $130,000 in payouts across play on a few different online slots, which is an impressive feat. His win illustrates a number of important lessons about slot winners, but it's also yet another example of someone at this casino taking down a life-changing sum of money.

How the Wins Unfolded

The wins happened on four different slots. Big Money Bigfoot, Dragons, Witches & Wizards and Hercules the Immortal were the four games he played to run up his winnings. His biggest individual payday came from Witches & Wizards to the tune of $75,198.70, but he ended up with about $134,242 in total. Daniel is extremely happy about his wins, and he said that he hasn't decided what he wants to do with the money yet because he wants to make sure he puts it to good use.

Often when you hear about a big payout on slots, you hear about a progressive jackpot. Daniel's win shows that there are more ways to win big sums of money than with a progressive. He was able to take down a six-figure win by not only getting regular payouts, but also from playing four different titles across his sessions. This is a pretty incredible feat, but it's not all that uncommon at sites like Bovada with their huge selection of great games from multiple software providers.

What Bovada Has to Offer

It seems like this online casino has a new big winner every other week, and their popularity combined with their great selection of titles is largely responsible for that. They have games from Realtime Gaming, BetSoft and Rival Gaming, and that gives US players a chance to get in on the action with a wide range of games with different themes, bonus features and available payouts. On top of that, they have lots of great promotional offers to give you value every single day of the week, and this includes free chips, deposit bonuses and more to boost your bankroll and give you even better chances of winning.