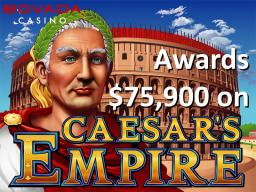 A ton of games have been made in the online casino space around a Roman theme, and Caesar's Empire is one of them. This game was produced by Realtime Gaming, and it has been known as one of their popular titles for years. A player by the name of Silvia L. from California, USA found out exactly why it's so popular after nailing a five-figure jackpot on the game.

The win came on the desktop edition of Caesar's Empire. While there is a random progressive jackpot that pays out in the low four-figures, Silvia was able to nail a bigger payout on the regular pay table to the tune of $75,900. This is a pretty sizable win, and it completely blows the notion out of the water that the only way you can win big money is by winning a progressive jackpot. In fact, this game has a progressive, but Silvia went for an even bigger prize.

This online slot uses a five-reel format with three rows, and there are 20 paylines available. The key sign that you're playing this game is that the wild symbols only show up on the first four reels. When one of them shows up on the first four reels and the Coliseum shows up on the fifth reel, you'll get a set of free spins. These free spins are hit with a 2x multiplier, and because you can unlimited additional free spins by hitting more of the wild, it can turn into a pretty significant payout overall.

There are big winners that come from Bovada Casino on a regular basis. They always have some news story coming out about a big jackpot winner, and it's easy to understand why that happens. They have a great selection of games from Realtime Gaming, BetSoft and other providers, and they have a large base of fans who play there regularly. Combine the two, and you have the recipe for a ton of winners, just like what they show off all the time.