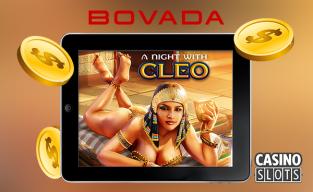 Every slot player's dream is to nail a big jackpot, and that's exactly what happened for one lucky fan at Bovada Casino recently. The slot A Night With Cleo paid out $180,000 earlier this month to a player named Juan from Texas in the United States. He was able to turn a small deposit into a six-figure payday with this progressive jackpot game.

A Night With Cleo is a video slot that has an Egyptian theme, and it has a little more sexual of a nature than most slots these days. The top prize is a progressive slot that starts out in the low five figures, and it gets larger as time goes on until someone nails the big one. Juan was able to pull it out in the end, and he was given a win worth around $180,000 for his efforts. What makes this score so much more interesting is that it was all off of a $50 deposit.

From Pennies to Progressives

This lucky player took down $180,000 after depositing $50 and getting a bonus worth $50. On his sixth spin for $1 a pop, he nailed the progressive, and that might be the fastest we can ever remember someone hitting a jackpot this big. He didn't have to wait for long to get Cleo right where he wanted her on the reels, and that's exactly what every player who get in on the action with this game wishes they could do as well.

It seems like Bovada Casino is always announcing new big winners each month, and with their strong selection of slots and other titles, it's not that surprising. They have a very strong and active fan base as well, so between that and their great selection of titles, it's easy to see why there are payouts like this announced on such a regular basis. Juan found out on his sixth spin of A Night With Cleo, and we're sure that he's glad he made that $50 deposit with a 100 percent match bonus.