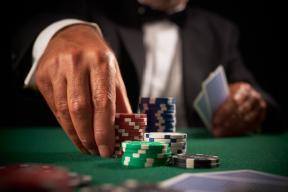 When you see that someone has won a big payout in an online casino, you normally figure that it's going to be some kind of slots jackpot. However, Bovada Casino has a very diverse array of games to choose from, and their big winners reflect that. That's why two players were able to take down just under $180,000 in winnings at a couple of different table games last week.

The first player of interest goes by Brendan, and he scored $95,914 on a winning run with Caribbean Stud Poker. Caribbean Stud is a game that requires a bit of strategy because you not only have to worry about your own cards but one of the cards of the dealer. This can drastically impact the way you play your hands if you adjust correctly, and it appears that a combination of skill and luck was what helped Brendan to take down nearly six figures in winnings on this game.

Another player who goes by Mark A. picked up $83,957 playing blackjack. This came across several sessions on Friday, November 13, the same day as Brendan's big Caribbean Stud winning run. This just goes to show that Friday the 13th wasn't unlucky for these two, and it also goes to show that Bovada Casino has big winners in every type of game, not just slots.

The game selection at Bovada Casino is one of the main reasons why they have such a diverse selection of winners from all kinds of games. Even for their slots winners, you see people picking up big jackpots on classic slots, video slots, progressive slots and games that have atypical formats alike.

This online casino has a pretty large popularity, and a big part of that is due to the fact that they accept players from the United States and have a great reputation for paying out when someone's a big winner. Add a huge selection of many different types of games, and you have the winning recipe that has kept them popular for quite a long time. Their popularity doesn't seem like it's going anywhere anytime soon, and players have a lot to look forward to as they add more games and make even more big winners.